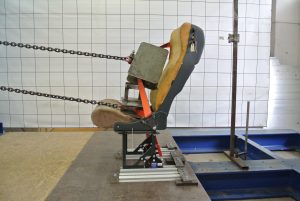 To obtain an M1, M2 or M3  approval of a vehicle, the entire vehicle as a whole should meet a series of EU directives, Regulation and testing requirements.

So for example, to achieve approval of a seat in a vehicle, the seat must not only be tested as an individual unit, but also as a complete full system installed in the vehicle which you intend to fit the seats into.

M1 vehicles : Vehicles for the carriage of passengers comprising no more than 8 seats in addition to the driver.

M2 vehicles : Vehicles for the carriage of passengers comprising more than 8 seats in addition to the driver’s seat and having a maximum mass not exceeding 5 tonnes.

M3 vehicles : Vehicles for the carriage of passengers comprising more than 8 seats in addition to the driver’s seat and having a maximum mass exceeding 5 tonnes.

Depending on the category and purpose of vehicle and alongside the type of NMI product determines the testing required.

For M1 seating the following is a brief description of the most essential tests which need to be performed.

There is a criterion for the seat geometry for optimum safety which is based on a benchmark called the “H-point”. This is the hip flexion point for an average person and is determined by a test doll, which is placed in the seat and physically measured up. The directives have rules as to how the test should be performed in relation to the H-point 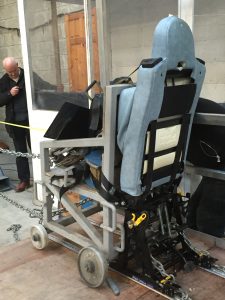 In order to ensure proper operation of the belt system, the anchoring points has to be able to keep the defined tensile stress, which has the same efficiency as if replicated in an accident. The upper shoulder belt and lower pelvic belt on a 3-point belt is secured with a traction device. A traction machine loads the seat with 1350 kg on each belt section, while the seat is exposed to a static load of 20 x weight of the seat in the lower anchorage points. NMI seat systems is loaded with a total of approx. 3.5 ton, and must be able to keep the load 0.2 sec. without breaking, to be approved.

For the seat belt, which of course is the primary occupant’s safety device in an accident, a more stringent extensive test requirement has been developed. Not only the functionality of a belt is part of the test, it now includes other criteria such as the tension for speed, angle, and the acceleration, this is all conducted by cycle tests. In addition to a dynamic and static tensile test, the behavior of all functions need to be tested also in temperature variations, water and resistance to dust

During this test, mainly seatback and the headrest is tested.

The seat is fixed in a test rig which replicates the shape of a person; the device is then forced into the seat back with a force of 53 Nm

The same test is repeated with a dummy head, so that the neck support and the back are loaded at the same time.

One of the main tests is the Dynamic sled test. The seat must be tested front and rear facing and must withstand a force of 20G. Sled tests now include two loose blocks impacting the rear of the seats to simulate loose luggage or boxes hitting the seat during a crash.

The headrest unit is tested in a worst case scenario where the head restraint’s ability to absorb energy upon impact is weakest. This is achieved with a measuring instrument that has a dummy head hitting the headrest, respectively from the front and back with a force which corresponds to a torque of 37.5 Nm.

For wheelchair securement requirements are laid out in ISO 10542